Indians in Taipei, Taiwan | 感謝您對印度春節好麗節的關注和參與 Thanks for attending an Indian Spring festival Holi!

A brief description of the Holi event (for next Holi details or more pictures, videos click here) Revellers spend a full day outdoors, celebrating the beauty of watercolours with community-wide merriment, musical performances, and Indian food and drinks. Holi, an ancient Indian springtime festival dates back many centuries symbolizes the victory of good overcoming evil, it is also known as the festival of colours or The festival of sharing the love in modern times. Holi has become popular not only in Southeast Asia but also across the world.

The Indian Spring Festival Holi in Modern Times The spirit of Holi is one of playfulness and inclusivity, so people of other faiths are often welcomed to join in on the fun. But there’s a fine line between appreciating the culture and appropriating culture. In recent years, the Indian diaspora has found that the Holi celebrations are increasingly drawing interest from non-Indians too. Once a year, all communities, race of people gather together to shower one another in colour, enjoy a meal, and celebrate the spring and their love for one and all.

(above pic. the invitees holding 'we are one world' souvenir gift & cheering up everyone for HOLI.)

Holi brings us together as 'One World' Mayur Indian kitchen has been organizing Holi since 2012 on a non-profit basis to bring the community together with an idea of "we are one world" as the splashing of colours blurs cultural and ethnic differences.The "Indian Holi Taipei" festival held on Saturday (March 16, 2019) in Taipei saw over 650 attendees from many countries, from various races and religions, celebrated Holi altogether, and enjoyed the day with delicious Indian cuisine, music, and dance performances.

Myth's & History of Holi It is not a colour party or colour run, many People who don't know the history of the spring festival often compares it with the colour run or colour parties! Holi is a religious festival that celebrates the beginning of spring and the triumph of good over evil, it comes the day after last full moon of Phalguna, the last month of the Hindu calendar (between late February and early March). It has religious significance. After all, this festival was originally celebrated within a Hindu context. According to the Indian scriptures, there once was a powerful demon king by the name of Hiranyakshyap.

(In above pic. Prahlad’s devotion to God Vishnu, Holika dahan & end of demon king Hiranyakshyap) This demon king was virtually indestructible, due to a boon granted to him by Brahma (the God of Life). Hiranyakshyap grew arrogant, considered himself a god, and demanded everyone to worship him. His son, Prahlad, however, was a devotee of Vishnu and refused to worship his father. As a result, Hiranyakshyap asked his sister, the demoness Holika (it is from her name that we get the word ‘Holi’), for her help to get rid of Prahlad. As Holika had received a boon that made her immune to fire, she went into a pyre with Prahlad on her lap, hoping that her nephew would be burnt alive. Prahlad’s devotion to Vishnu, however, saved him, and the demoness was burnt to death instead also known as 'Holika Dahan' in the Hindi language. This is a practice that takes place on the eve of Holi and is also known as the ‘Chhoti Holi’ (‘Small Holi.’) During the ‘Holika Dahan,’ bonfires are lit to commemorate the deliverance of Prahlad from his evil father and aunt. In many parts of India, an effigy of Holika is also burned on the fire. Thus, the ‘Holika Dahan’ is a reminder that good always triumphs over evil.

(above pic.) The Interns Live Band sponsored by Mojo Music at Holi in Taipei 2019.

(above pic.) Laxmi Indian dance group at Holi in Taipei 2019.

(above pic.) Laxmi Indian dance group at Holi in Taipei 2019.

(above pic.) The Chefs preparing meal for all at Holi Taipei 2019.

Where to watch Cricket world cup 2019 all matches in Taipei, Taiwan!? free entry! 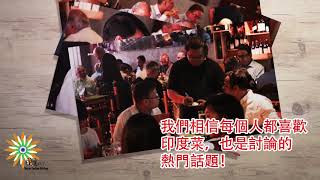 Indians in Taipei, Taiwan | 感謝您對印度春節好麗節的關注和參與 Thanks for attending an Indian Spring festival Holi!

All about Tamil Pongal festival in Taiwan 2019